Australia has entered into the Regional Comprehensive Economic Partnership (RCEP) Agreement between with 14 other Indo-Pacific countries, including China, Japan, South Korea and New Zealand.

Referred to as the “world’s largest free trade agreement” by trade minister Simon Birmingham, the deal is considered critical for Australia’s recovery from the COVID-19 recession and is expected to favour businesses operating in the services sector.

“This deal will further integrate Australian exporters into a booming part of the globe, with RCEP countries making up nearly 30 per cent of world GDP and the world’s population,” Minister Birmingham said.

“RCEP has been driven by the 10 ASEAN nations, who collectively constitute Australia’s second largest two-way trading partner and have successfully brought Australia, China, Japan, New Zealand and South Korea into this regional trading block with them.

“This agreement may have taken eight years to negotiate, but it could not have come at a more important time given the scale of global economic and trade uncertainty.”

RCEP eliminates 90 per cent of tariffs between its signatories, while also establishes common rules for e-commerce, trade and intellectual property.

As such, Mr Birmingham said the deal heralds a new level of economic co-operation that is critical to the post-COVID-19 recovery.

“Greater openness within our region, as well as the greater integration of value chains and more common rules of origin which this deal delivers, will make it easier for Australian businesses and investors to operate throughout our region, helping Australia to continue to grow our exports,” the minister said.

Australia will now work towards fully ratifying RCEP as soon as possible.

“Our trade policy is all about supporting Australian jobs, boosting export opportunities and ensuring an open region with even stronger supply chains. RCEP builds on our trade successes and is good news for Australian businesses,” Prime Minister Scott Morrison said.

“With one in five Australian jobs reliant on trade, the RCEP Agreement will be crucial as Australia and the region begin to rebuild from the COVID-19 pandemic.”

When finalised, the main benefits for Australia are expected to be:

The Australian Alps get more snow than the Swiss Alps…

Australia’s highly educated, multilingual and multicultural workforce has an entrepreneurial spirit. The country has world-leading capabilities in blockchain and quantum computing, and its robust startup ecosystem has strong competencies in agtech, edtech, fintech, foodtech and medtech.

Minister Taylor said the delegation aims to ensure that Australia becomes an international hub for cyber security innovation and investment.

Charts can be downloaded and saved as images for use in reports and presentations (when using please reference www.austrade.gov.in)

Australia was the second country in the world to grant women the right to vote; this occurred in 1894.

Australia – It’s not just a great place to come for A Holiday… It’s also a FANTASTIC place to do business… Here’s why:The founders of HR tech startup myInterview want to revolutionise recruitment. With support from the Landing Pads program, they are well on their way. When the founders of Australian startup myInterview left high school and began university, they didn’t expect to have such a hard time finding a part-time job. With many people applying for each role, Guy Abelsohn and Benjamin Gillman found it impossible to differentiate themselves through a traditional resume. This sparked the idea for myInterview, which they launched in 2014. myInterview helps employers hire the right people with a customisable one-way video interview solution. Abelsohn and Gillman’s goal is to transform the recruitment process by bringing candidates’ applications to life and showing the people behind the paper, while making the whole process faster and more efficient. Employers post ‘interviews’ on myInterview’s secure platform, including a company video, a role description and up to 10 text or video questions. When applying for a role, candidates have 30 seconds to review each question before recording a response. myInterview also delivers a Video Apply Widget that authenticates cover letters by giving candidates the opportunity to pitch themselves for a job in person. In 2016, Abelsohn and Gillman began planning a research and development centre in Tel Aviv to underpin further technology development and business growth. To support this endeavour, they applied for the Tel Aviv Landing Pad as part of the Landing Pads program. ‘There’s so much tech going on in Tel Aviv, it’s quite mind-blowing,’ says Gillman, who is currently basedin the coastal city. ‘We wanted to tap into both the talent and the investment, as well as the time zone, which makes it easier to do business with Europe and the US. The Landing Pad was a great way to do that.’ As part of the National Innovation and Science Agenda, Austrade has established five Landing Pads in Berlin, San Francisco, Shanghai, Singapore and Tel Aviv. Landing Pads supports market-ready startups/scaleups to go global. Participants are given an operational base at a Landing Pad for up to 90 days, where they benefit from Austrade’s extensive global network of contacts and tailored business development assistance. A world-leading startup ecosystem In November 2016, the myInterview team arrived in Tel Aviv. Gillman was on the ground full-time for 90 days while Abelsohn visited throughout. They were housed at SOSA (South of Salame), a vibrant four-storey space and community founded by a group of innovation stakeholders, including some of Israel’s most prominent angel and venture capital investors. Abelsohn and Gillman arrived with a clear plan to access expertise from key advisors, investors, CEOs and CTOs that would allow them to refine their business model and technology. They wanted to take things to the next level and ensure their technology was cutting-edge. ‘SOSA is an amazing resource,’ says Gillman. ‘There’s a huge buzz around it. We had the German Government come through last week and the President [Frank-Walter Steinmeier] was here. It’s really one of the greatest hubs in this country.’ myInterview had access to an extensive range of experts and events, as well as onsite value creation associates who connect startups with valuable contacts. They also received one-on-one support from the Austrade Landing Pad Manager, Omri Wislizki. ‘Omri basically acts as your business development guy,’ says Abelsohn. ‘We call him “the super connector”, because he can open doors into all types of companies. Without that support it probably would have taken us six month to familiarise ourselves with the landscape.’ Forging powerful connections Through the Landing Pad, myInterview connected with major global tech companies, potential corporate partners and venture capitalists, and raised enough capital to expand its R&D efforts. ‘I had a casual chat with about 20 venture capitalists in the space of two months, which is huge,’ says Gillman. ‘Those meetings usually take months to get, and here I could sit down and speak to them in a matter of minutes.’ The myInterview team has since launched a new line of business, which involves using analytics, machine learning and artificial intelligence to rank candidates based on factors including what they say, their tone of voice and their confidence level. ‘We would never have taken this new direction without the influence of the people we met through SOSA and the Landing Pad,’ says Gillman. They also hired three people, two based in Tel Aviv and one in the Ukraine, taking their team to five. Going global In the months after completing the Landing Pads program, myInterview was accepted into the 12-week Slingshot HR Tech accelerator program, supported by recruitment giants Seek and Hudson. Abelsohn and Gillman are focused on continuing to develop their technology and enhancing its capabilities to integrate with HR management software. This will allow them to access a global customer base. ‘The Landing Pad is an opportunity that enables you to look at the bare bones of your business and be able to see what is needed to go global,’ says Gillman. ‘You get access to people that you couldn’t get access to otherwise. Ultimately we’re in a much stronger position from participating in this program. ‘I’d recommend people take the opportunity because it can really accelerate your business.’ Source: https://www.australiaunlimited.com/landingpads/news/case-studies/hr-tech-startup-launches-a-recruitment-revolution?utm_campaign=MD-MI-Export+Update+June+2017&utm_medium=email&utm_source=Export+Update+Newsletter DID YOU KNOW: The most widely said Australianisms are “no worries” (74 per cent of Australians have used this phrase), “arvo” (73 per cent), and “G’day” (71 per cent).

A delegation of more than 60 cyber security industry leaders will put Australian expertise on the global stage in a visit to the United States that will build transnational partnerships to fight cybercrime.

Led by the Minister for Law Enforcement and Cyber Security Angus Taylor, the delegation aims to advance Australia’s technology and cyber security industries.

“There are huge opportunities to grow Australia’s industry over the next decade and this visit to the US is designed to help unlock some of that potential.”

Minister Taylor said the delegation aims to ensure that Australia becomes an international hub for cyber security innovation and investment.

“With the growth of new technologies, including data analytics and Internet of Things, comes new cyber threats, so we need to ensure our technology and expertise to fight cybercrime is more sophisticated than ever before.”

Organised by Austrade and the Australian Cyber Security Growth Network (AustCyber), the delegation includes expertise across a range of solutions, including quantum encryption, endpoint protection and threat intelligence.

The delegation will attend from 16 to 20 April the RSA Conference in San Francisco, the world’s largest cyber security event, and promote their products to investors and potential partners.

A smaller delegation will also travel to Washington DC for defence industry meetings.

‘Thanks to more flight options – 33 per week – between Australia and the Philippines, local importers are open to bringing in fresh fruit via airfreight. Airfreight is especially good for stone fruits, which have a shorter shelf life and are more sensitive to temperature,’ says Elodie Journet, Senior Trade Commissioner and Minister Counsellor, Austrade Philippines and Micronesia.

Australia exported A$28.8 million worth of fresh fruits to the Philippines in 2018, making Australia the Philippines’ third largest source of imported fruits after China and the US.

The volume of Australian fresh fruit exports to the Philippines has increased by 230% since 2010. This is largely due to the market access gained in 2012 under the ASEAN-Australia-New Zealand Free Trade Agreement. The agreement reduced or eliminated tariffs for a range of fruits, including stone fruits, citrus, kiwi and table grapes.

Exporters that want accreditation for their cold treatment facilities should email a formal request to the Department of Agriculture’s Horticulture Exports Program.

Australian agriculture feeds 60 million people around the world each year.Over 53,000 Australian businesses export their goods to the world.

Australia has an open and globally integrated economy, making it a trusted partner for trade and investment.

International companies can tap into Australia’s deep business and cultural ties with Asia to expand into or enter global value chains across the region. Australia’s free trade agreements facilitate the smooth flow of goods, services and investments with major economies across the globe.

Australia has an open trading economy where:

Charts from the Benchmark Report
The Australia Benchmark Report provides rich data demontstrating why there is no better place than Australia to do business. The report examines five key investing in Australia – Robust Economy, Dynamic Industries, Innovation and Skills, Global Ties and Strong Foundations – and compares Australia’s credentials with other countries.

Charts can be downloaded and saved as images for use in reports and presentations. (when using please reference www.austrade.gov.au)

The Great Barrier Reef is regarded as the world’s largest living organism, and is often listed as one the Seven Wonders of the World. 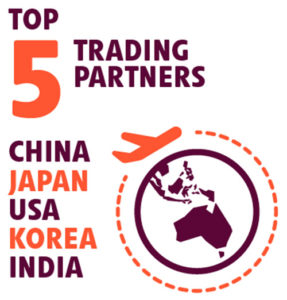 Australia’s highly educated, multilingual and multicultural workforce has an entrepreneurial spirit. The country has world-leading capabilities in blockchain and quantum computing, and its robust startup ecosystem has strong competencies in agtech, edtech, fintech, foodtech and medtech.

Charts from the Benchmark Report.

Charts can be downloaded and saved as images for use in reports and presentations (when using please reference www.austrade.gov.in)

Australia was the second country in the world to grant women the right to vote; this occurred in 1894.